And now, that the Great Work is completed, we can, I can relax a bit, still thinking of the gardening topic, think I am gonna put that in too.
That is the good side of having your own server, hosting. Free speech , I like that, I know you do too , that is why there are no donations, could put that button up again, you never know, maybe one soul around, keep tempting faith….

It is all more tidy now. It is better this way.
Have to make , perhaps, new videos, maybe slightly more delicate. As there are so many delicate souls out there you see. Can´t go too wild, the poor things, they would not understand, poor darlings.
They just wouldn´t, trust me on that one.

We will be good for some years, as I paid for three years hosting, in advance. Bit of a gamble there but it paid off.
But will do less postings from now on, I dearly hope so.
But you see it has to be perfect and I am convinced we are close to that now.
Very close, as close as can be.
Was that blushing, no but I am working on that also.
One day I get it right.

With all the warnings about food shortages and a bit of gentle nudging from Sunflower, a few months ago I decided to try my hand at growing a few vegetables.

Some years ago I was very enthusiastic, but living on my own it’s not so appealing, so this is a sort of experiment.  It involved a LOT of work to get the area ready for planting, as there was a huge heap of wood and brambles that need to be shredded as I don’t want to be throwing out my ‘greenery’.

However, the shredder needs to be fixed, hopefully soon.   Anyhow, I got the area tidied up and fertilised/manured, put some politeness on some existing raspberry canes, loganberry canes and a grapevine.  Tidied up my compost heaps.

I got several huge bags if grass clipping from my neighbor , so my compost bins and heaps are heating up a lot’ The photos are showing things at a very early stage, after all it’s only the beginning of May and our season doesn’t start very early.

It can be dangerous planting potatoes in April as a late frost can do serious damage if the leaves are above ground.  So far so good,   I also have planted out some mangetout peas, courgettes, only yesterday Swiss Chard and little lettuce plants.

There’s also some onions coming on.  Oh and a couple of rhubarb plants, I forgot to take a photo of those. 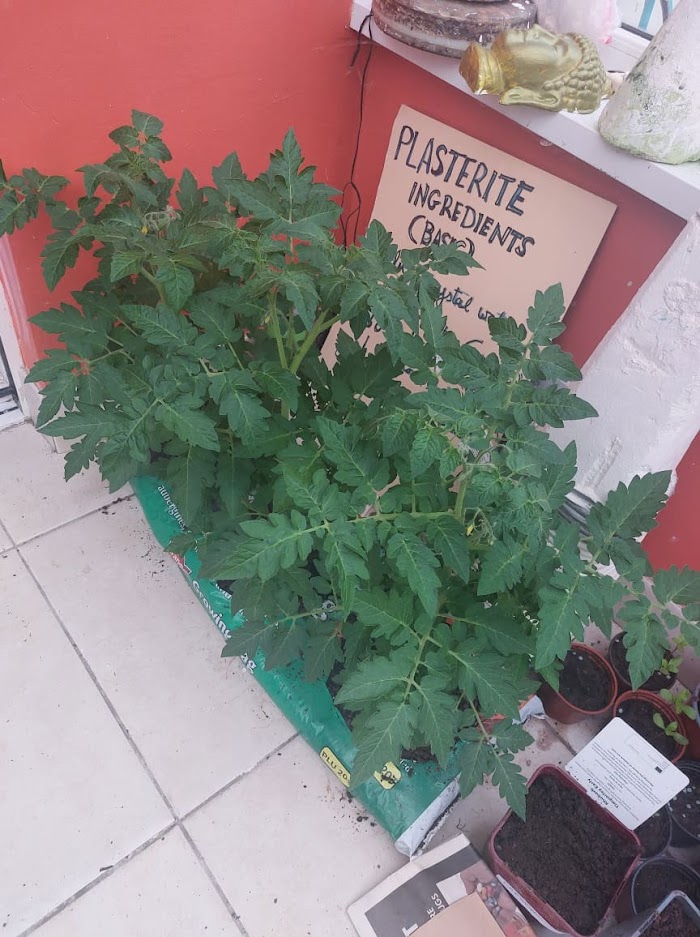 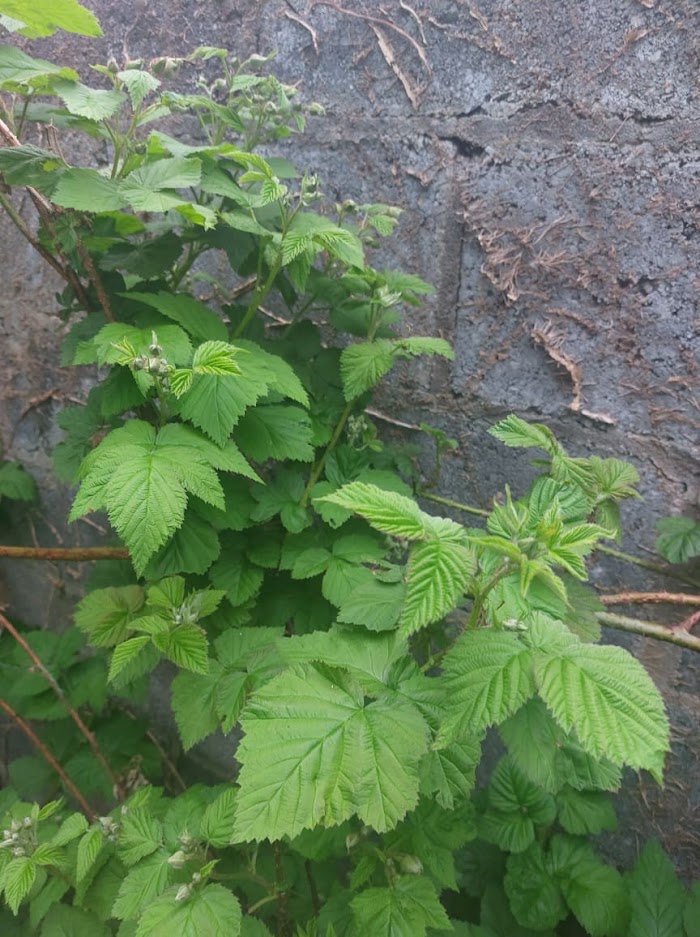 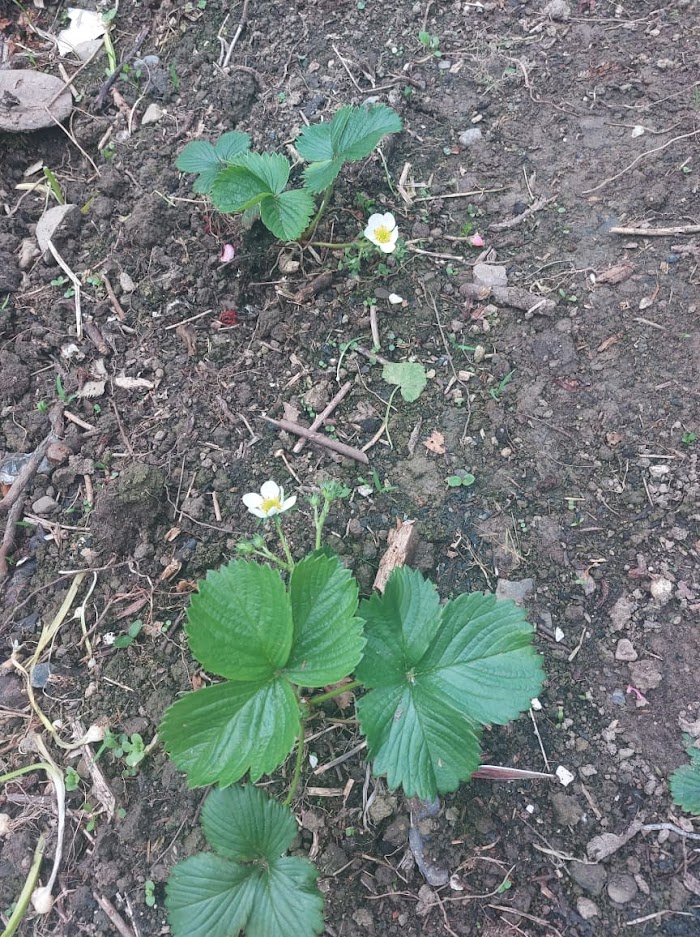 I also decided to start experimenting with baking my own bread. 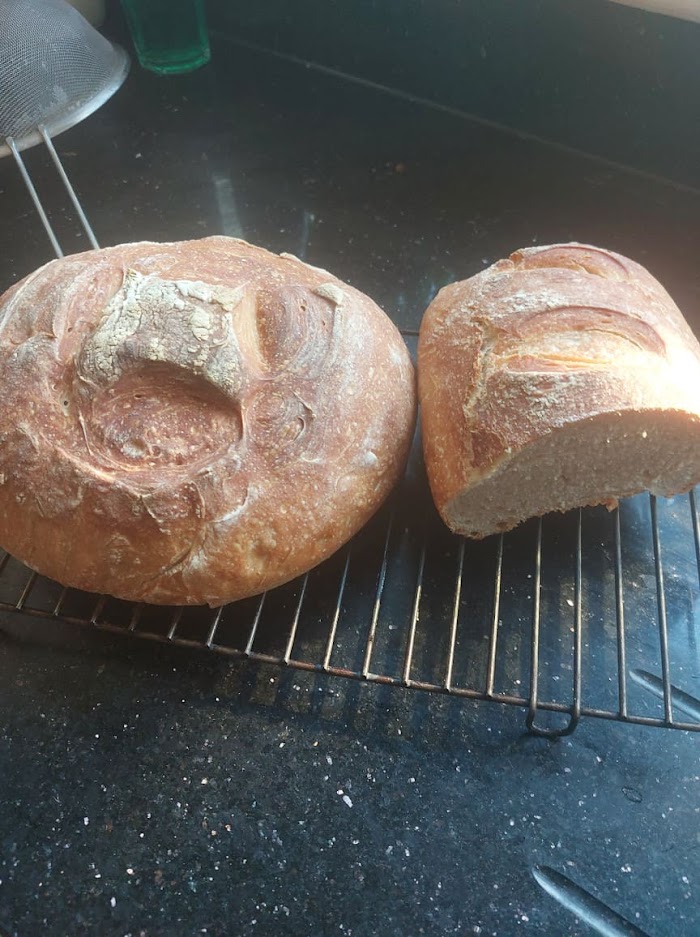 I recently sent off to the US for a special sourdough starter, called the Kensington starter. It seems very good, if treated correctly.

The first two loaves I made I was thrilled with, the last one recently I was in a hurry and it was not so perfect, but still edible.   I have been finding it difficult to find ‘strong’ bread flour in the local shops ?first sign of shortages? but when I went online I found I could order it in bulk, at not too high a price i.e. €32 for a 16 kilo bag.

I’m expecting it to be delivered on Friday.  That strong flour is also good for choux pastry so I can experiment with eclairs, how exciting!

Well, to be honest, I made my own bread, is that karma or what, or is it called synchronisity..hmm …weird eh…hard to get your head around sometimes…could bore more with the helicopter parades, strange plane, in the dark coming over doing strange things, but…won´t do that…bet you have heard that a zillion times, but it is ,unfortunately, for me at least, a reality.
Yes made my own bread, tastes amazing , a real winner. You are doing great too, especially with your sourdough bread, have tried that once, was ok, but too much hoopla…with starter etc…
I just use a bread making machine, mix the flour with an amount of water , toss it in the bread maker and push a button, how simple can it be, can barely mange duhhh…but saves time
takes a minute to do and after two hours that thing gives a peep and voila, there you have it, a new bread.
Not really a bread person myself but this one is good.
Your gardening, well yes, astonishing as usual, bow wow, but I am doing things too, in my much more limited space, my garden is not as uberclass sized as yours, just a peasant you see.
Scraping the barrel, join the herd.
We are all peasants eh
Even if we had five million we would still be peasants.
Anyway, enough peptalk…

I moved my broadcasters, dusted them, as they stood there for years, spider webs, the only ” problem” with this life force energy , some use the old school name which we refuse to use, starts with an O and ends with and ” ite ” that is taboo
Can´t have that, that is old school, passe, obsolete, like we are, we are all obsolete according to our inbred psycho androgyne betters. They are so much better than us eh …pffffffff…gimme a break.
Before I slide into another long rant like I once did have to brace myself here, trying to be normal, you know, like those TV people, those zombies around us.
As I once said, the hardest thing, from now on, actually since 9-11 , is to hold on to your sanity as things , deliberately, are made insane.
The inverted world. Everything is upside down.
what I was trying to say, yes I can be a bit long winded, but that is good , you see, I like to explain things well, you know, make a point , so we all understand the point.
If I am too straight often folk miss the essence of it, so I have to dance around the bush a bit more so we can all follow the thread here.
The only issue with that energy is it makes things grow very fast so that is why I had to remove those broadcasters , things go bananas in my garden you see, exploding with love and light, too much of a good thing, so that is why, to keep pruning etc to a minimum.

Things just grow too big, to put it simple.

So I moved them about ten meters further away, will it help ? No idea.
Perhaps.
We will see.

You have been paying attention I see, yes austerity, the big plan, they have to bring us to our peasant knees you see, that is essential, so …they help us …carbon tax, price all through the roof, bla bla bla old news
and sure enough, best to keep stock, keep things at hand, make sure you got a good supply, etc, won´t dwell about it too much, we have done that in the past, but that is a must be
make sure you got plenty of basic essentials, food stuffs, drinks, in your case wine and gin tonic , inflation, all by design, bla bla boring …but it is what it is
We have to face it, no choice there
So that is one of the things we obsolete mud dwellers can do, at least prepare, prepping yes
That is simply pure logic, one does not have to be a whiz kid for that
But most never see reality , we cannot help them but I have plenty and therefor am abled to help others, if need be
Those dumb TV people, as that might come in handy , you never know
a bit of trading etc
so I have extra for that
of course you keep rotation your supplies
If need be could live for six months or longer
without shopping to GMO monsanto supermarket
we have not choice , again this choice thing keeps popping up aint that weird
pesky …
and yes they are working on laws here
to make the jabs mandatory, starts with this than that, you know stepping stone ,such amazingly boring topics, makes one want to puke isnt , living in zombie land
but we have to keep our hopes up
trying to keep our sanity together or what s left of it
Important !!!

It is all we have left
our sanity
to say two and two….etc
soon be verboten
jadija…bla bla …CNN RTE bla bla…yawn yawn…
I knew when it started they never let it go
this scam
the plandemic it is the stick they need , together with the other agendas to hammer us into la la land
anyway

I had to deal with a lot of anger, still in anger management so to say
I knew they would pull this crap on us
us is the five per cent of the population that have, a few, functional brain cells left…
there never were many
always been so
four per cent
it has always been this way Jenn

that is why I never believed in demos , protesting,  not saying it is bad but
I rather do things that have an effect
that actually do change things, the momentum, the balance
and they do , they surely do

So , doing those things, gardening, cooking, hiking, whatever, keeps the sanity and is necessary to be cared for.
If one would not watch TV one would not know there is a ” pandemic” going on
It is all bogus, half truth, fakery cabal shite
so little things, like that goof that wrote that about the plandemic on a bench in the forest yes that , those things, keep you sane
yes anger I had , have  still, a lot a lot lot lot of that
to live in an insane world, made to be so , by the system
not easy to avoid
but I keep going and will never give up or give in, even though choices are sometimes hard to make and usually there are threats involved
You know the game, preaching to the choir… 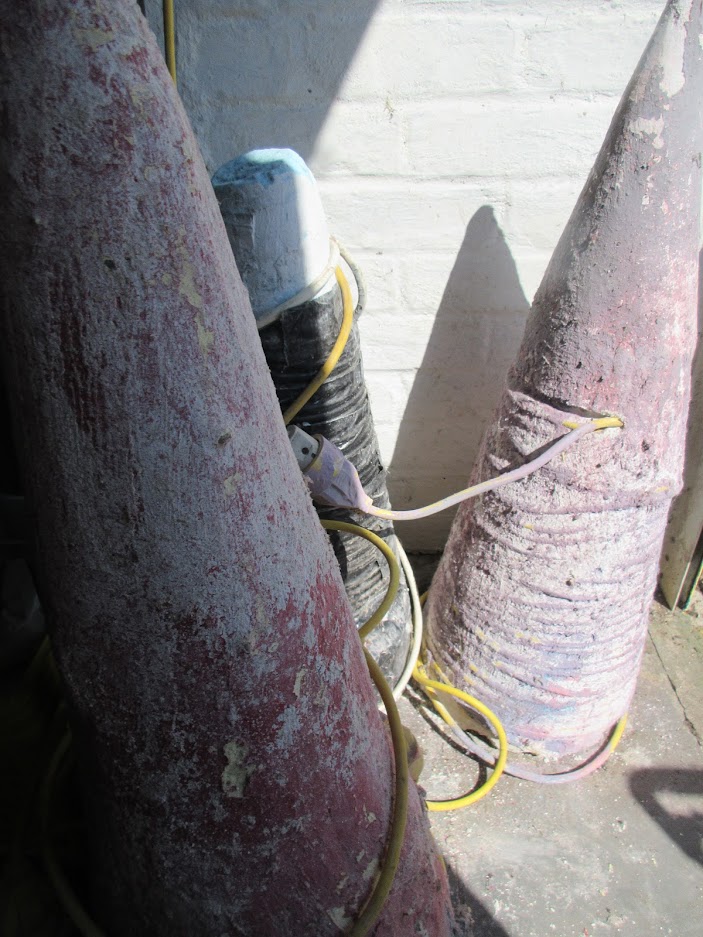 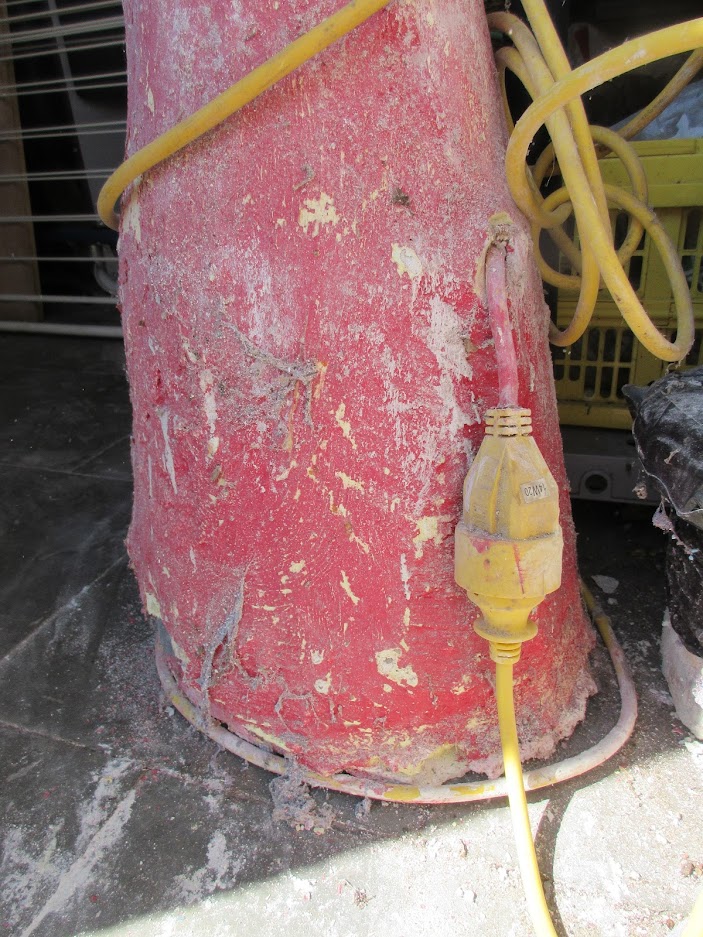 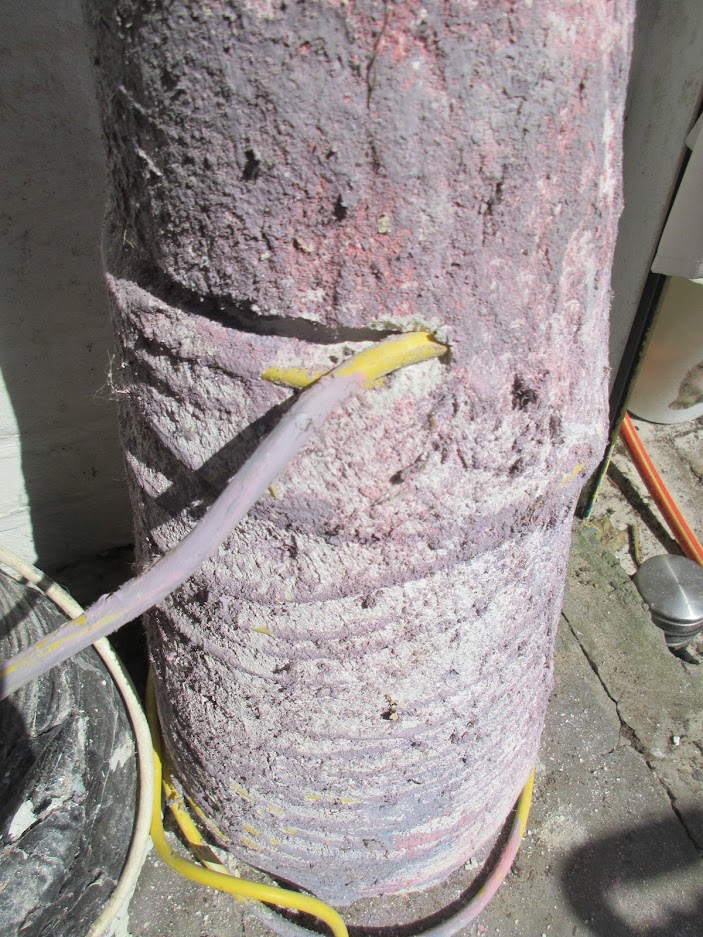 by far the strongest broadcasters on planet earth, whoops there you go , said it , bam
my humbleness gets ahead of me, terrible when that happens, awful, blushing…. 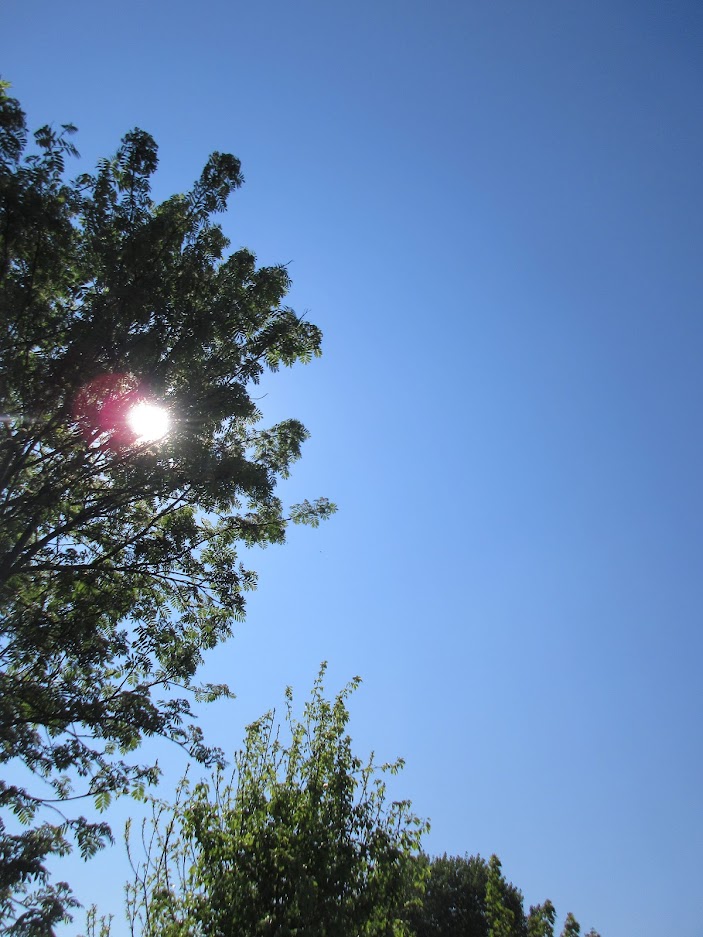 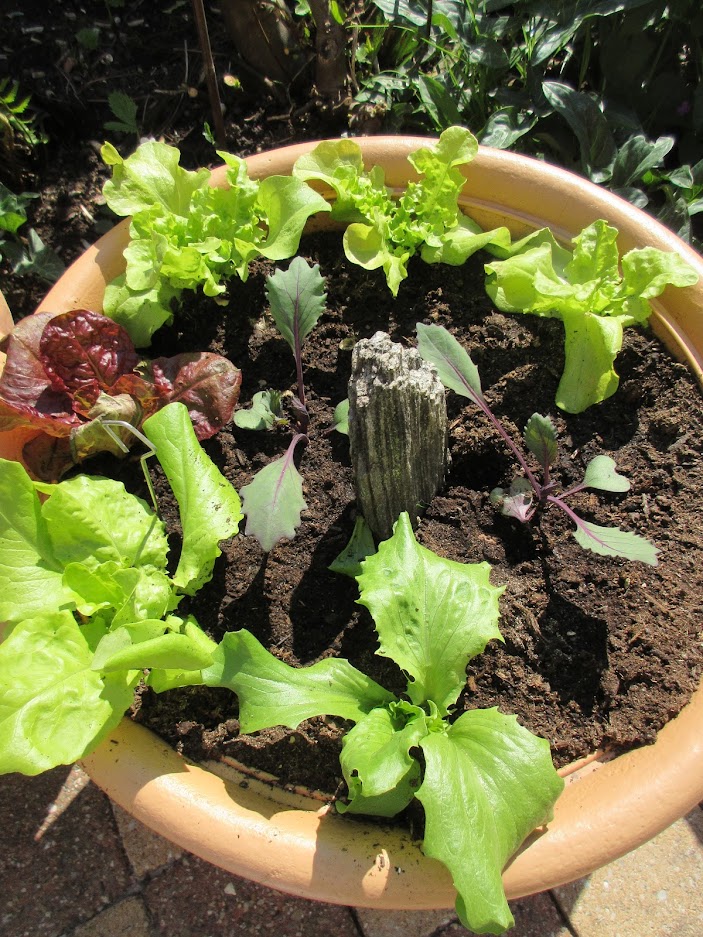 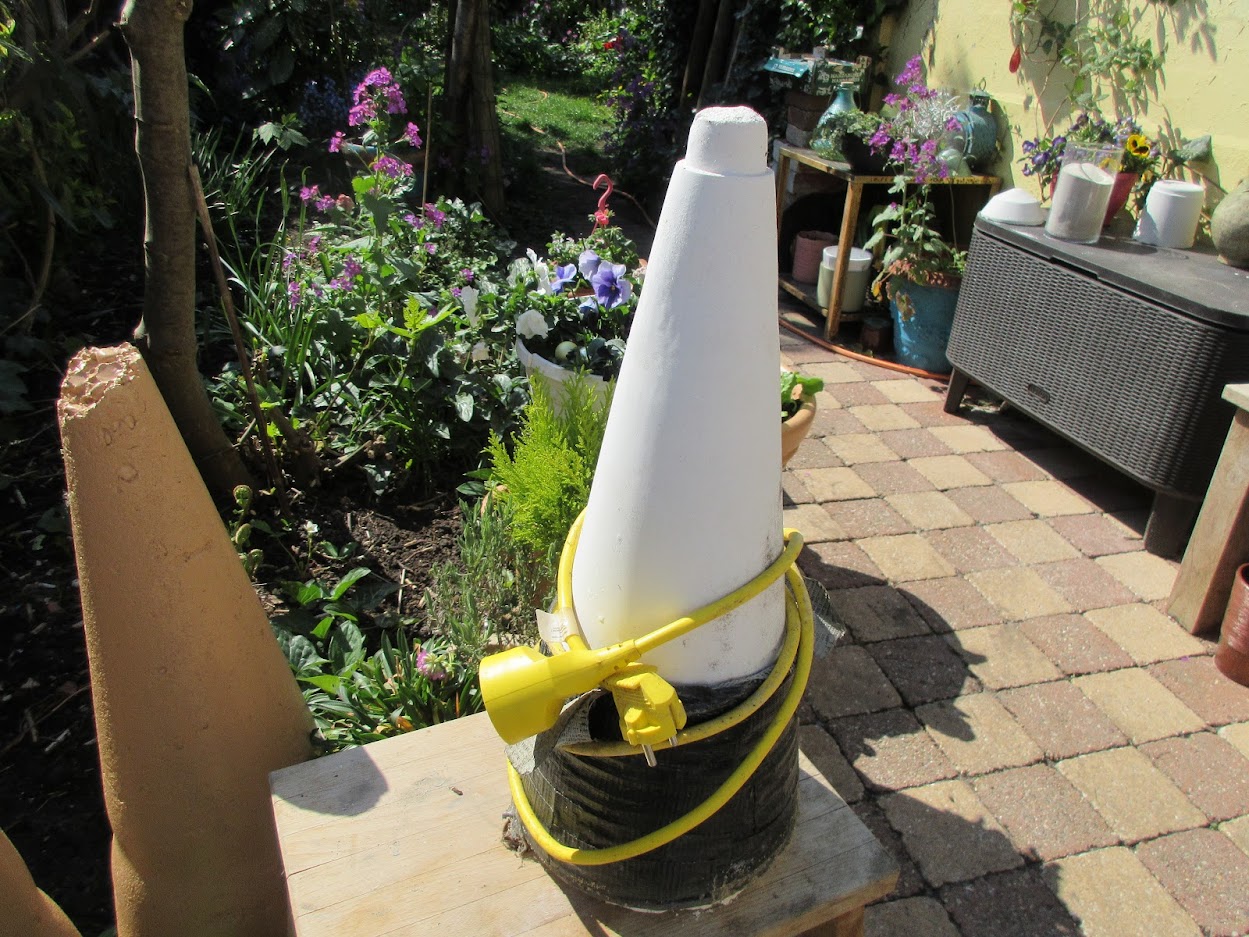 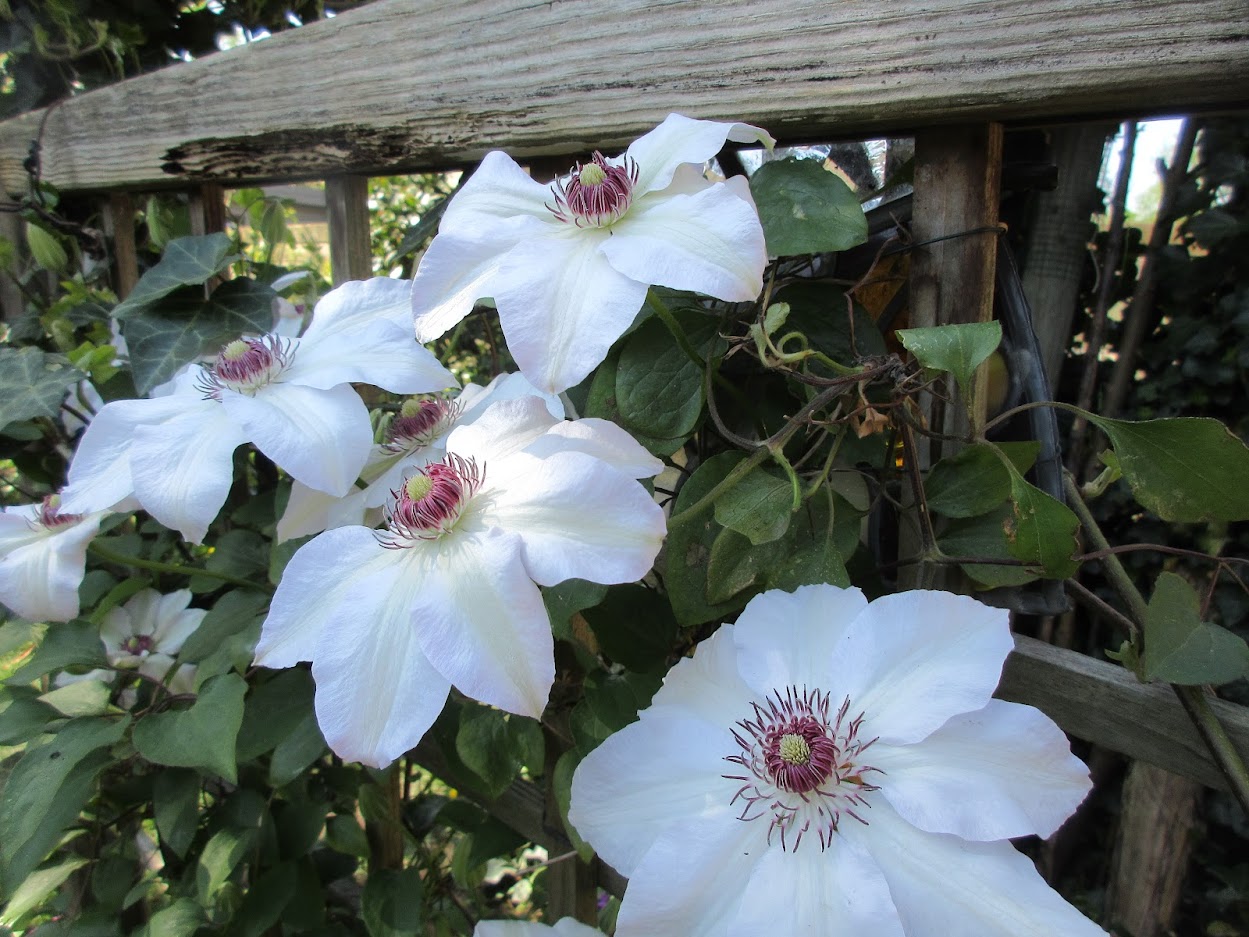 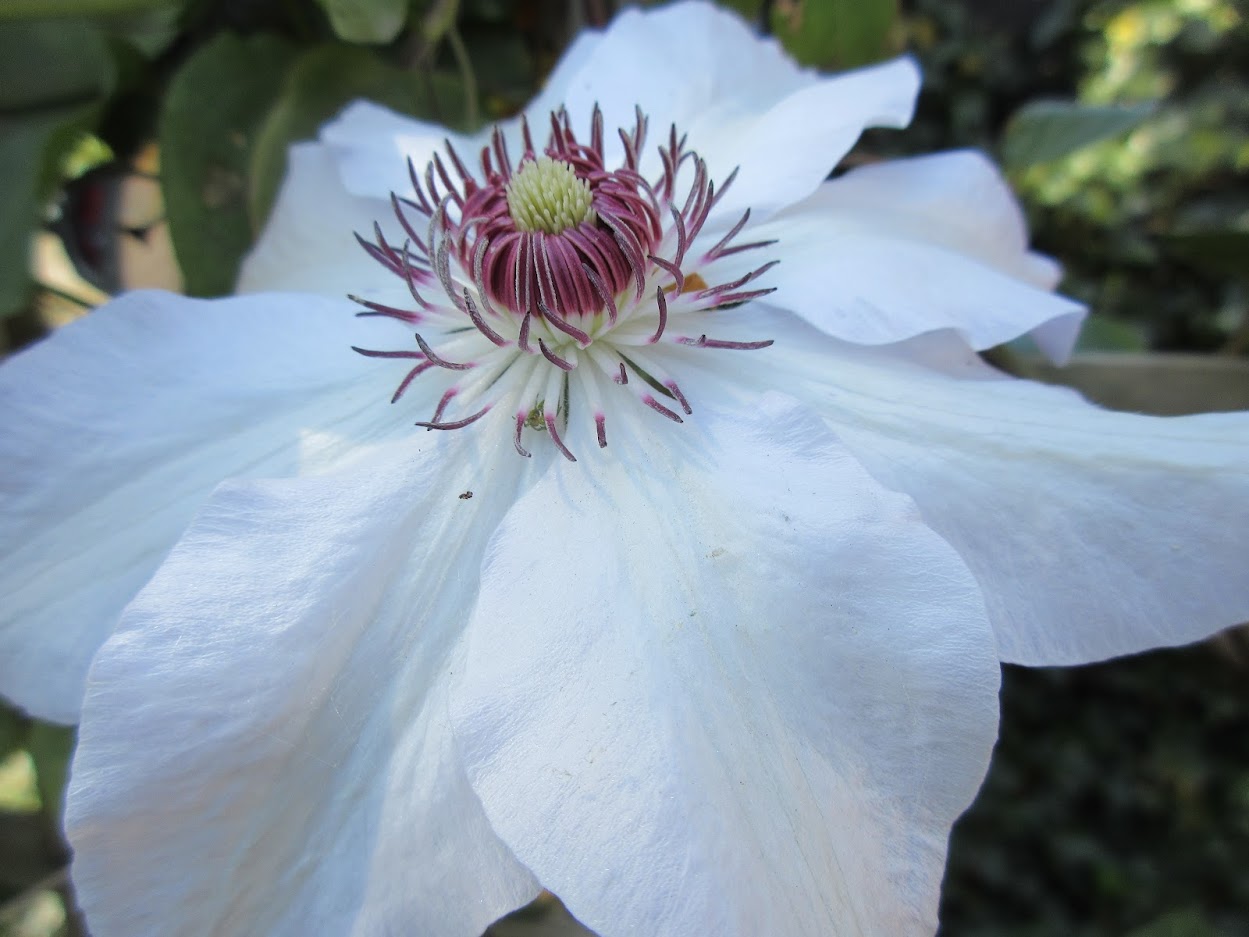 and all made with that camera you send, as my broke during a gifting trip, I stumbled and well game over for camera, thanks again J , appreciated.
You use that cell phone thingy , well good enough, happy to know
Quite an astonishing camera 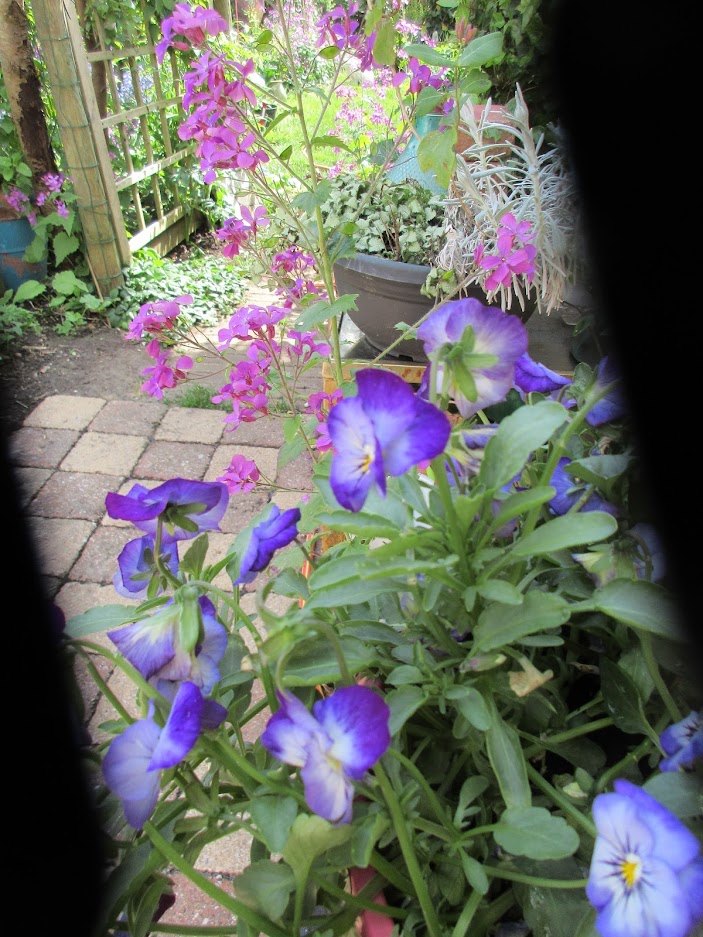 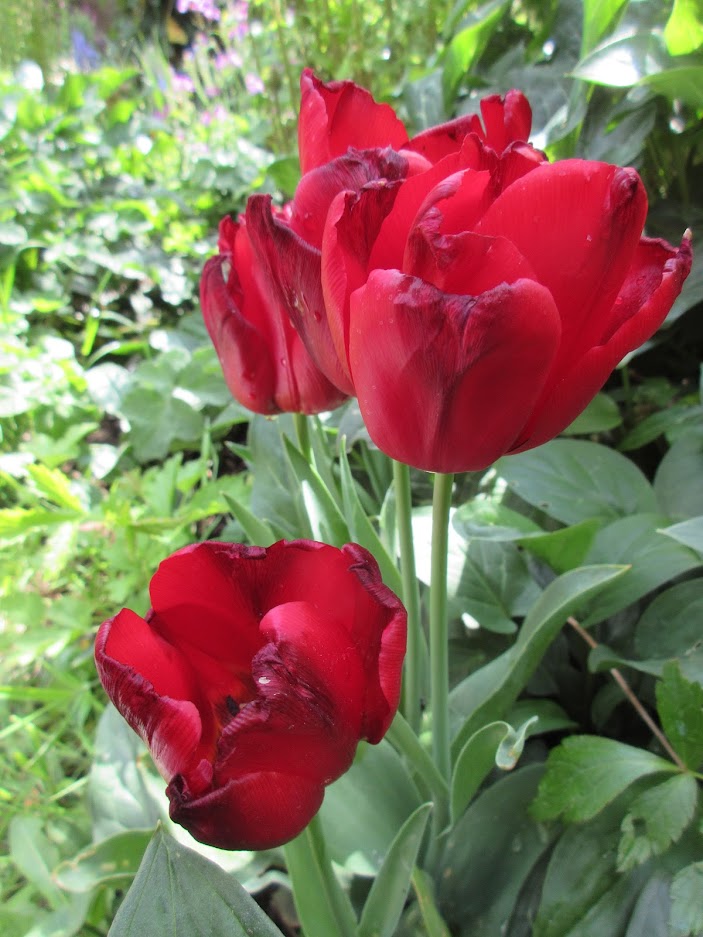