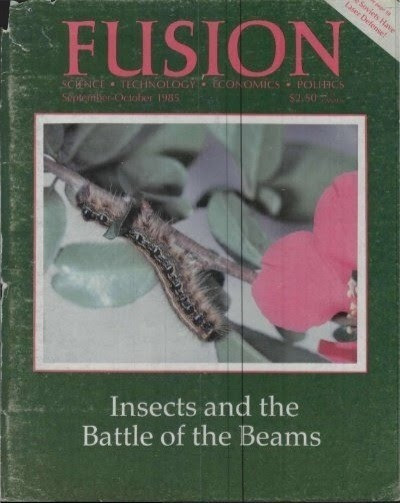 This article appears in the February 4, 2011 issue of Executive Intelligence Review and is reprinted with permission.

Entomologist Philip S. Callahan dedicated his life’s work to a field he termed “reverse bionics”—examining the properties of human inventions to understand the means employed by nature for similar ends. In this case, it was his experience as a U.S. Army Air Force radio operator, working with the electronics of antennas and tuned circuits during World War II, that led him to the conclusion that insect antennae sensilla (the tiny micrometer structures covering what we typically call the antennae) were themselves functional electromagnetic antennae, allowing insects to utilize infrared frequencies, and not chemical scents per se, to “find their way around nature.”

According to Callahan, the infrared portion of the electromagnetic spectrum, comprising some 17 octaves, and therefore, the largest region, provides fertile ground for study of the regulation of the biosphere:

“In terms of the overall universe, of course, all radiations are natural because they come from the sun and stars. In terms of our living environment, however, the radiation that is natural to our bodies is the huge sea of visible light and infrared radiation in which we begin, live, and end our lives, and which surrounds us day and night alike. Natural night light is just as important to our bodies and to all living things as is daylight, for as we can see from the spectrum of Earthly radiation, nighttime—as well as daytime—is primarily an infrared environment.”[1]

Infrared (“below red”) radiation was discovered during refraction experiments by the astronomer John Herschel in 1800, establishing for the first time the existence of “invisible light.” Any object above absolute zero (0°K), i.e., every object, emits infrared radiation. So, for example, NASA’s Spitzer Space Telescope is able to detect the infrared signatures of distant celestial bodies, by peering through dust clouds which trap visible light, but which are transparent to certain bands of infrared.

One of the central features of our unseen environment on Earth, is the stimulation of gas molecules in the atmosphere by ambient infrared, visible, and ultraviolet (UV) radiation. This pervasive environmental radiation “stimulates them to oscillate at many unknown frequencies of colors—not visible colors of red or blue or green, but infrared ‘colors’ of much longer wavelengths. If we had infrared eyes, we would give names to these colors—these auras of beautifully psychedelic infrared frequencies, as easily tuned to by an antenna as are the visible color by the rods and cones of our eyes.”[2]

These subtle fluorescences are a key component of insect communication and navigation, a discovery pioneered by Callahan, through lab experiments in which he irradiated pheromones and other organic gases with low-intensity UV light, and measured the response of insects such as moths (which can also see in the UV spectrum). Insightfully, he remarks that, “It is just such unknown mysteries of nature as these that space research will uncover for us. The entomologist and the space scientist must form a new and firm partnership to study nature’s secrets together.”

Airborne molecules can emit unique and subtle electromagnetic infrared “colors” as coherent, low-intensity, laser-like radiation. “The word laser refers to light because visible light lasers are the ones most commonly used by man. It is far easier, however, to lase molecules that have absorption bands in the infrared portion of the spectrum, and, as a matter of fact, there are far more possibilities for lasing infrared than visible radiation. This is true because it is easier to stimulate low-energy wavelengths than high-energy ones. X-ray and UV lasing require extremely high-energy pumping sources, whereas infrared usually requires only visible or near-UV pumping radiation. . . .

Scent, in my mind, is a fleeting-floating world of vapors that luminesce in many, many different infrared colors and can be amplified and collected by a scent organ such as the insect antenna. The antenna sensilla are tuned as a resonating system to these infrared frequencies. Accordingly, I coined the term ‘maser-like frequencies’ for the scent infrared colors that we could not detect until the early 70s.”[3]

So, how do insects receive these frequencies? Oscillating gas molecules, be they pheromones or other organic scent molecules, disperse through the atmosphere and accumulate on or near the insect antennae (which have a static electric charge due to their waxy covering), transmitting their specific infrared frequencies down the sensilla antennae/waveguides. The frequency of the emitted infrared changes depending on the concentration and temperature of the gas (which cools as it disperses), thereby giving information about direction and distance to the emitting source, whether that source is a plant, a rotting carcass, or potential mate. Apparently, insects are also able to modulate the incoming frequencies through the beating of their wings and the attendant vibration of their antennae, and their constant rubbing of legs and antennae serves to improve their receptivity to the infrared frequencies, by clearing away debris and water moisture.

The implications of Callahan’s work for pest control, especially for agriculturally vulnerable places like Africa, are enormous. But so too the potential for advancing our understanding of the fundamental nature of electromagnetic radiation itself. For, while there is a close analogy between the man-made antennae used in electronic communication and those utilized in the insect world, the direct comparison extends only so far, given that living organisms are not simple tuned circuits. Further work on the interaction of infrared and other radiation with specifically biological processes will revolutionize our understanding of such radiative phenomena, which are currently defined solely according to measurements by abiotic instruments. However, Callahan’s discoveries already point to a partial reconciliation of “chemical” and “electromagnetic” effects, showing that the distinction—as in the case of scents—may not be as sharp as normally assumed.

This site uses Akismet to reduce spam. Learn how your comment data is processed.