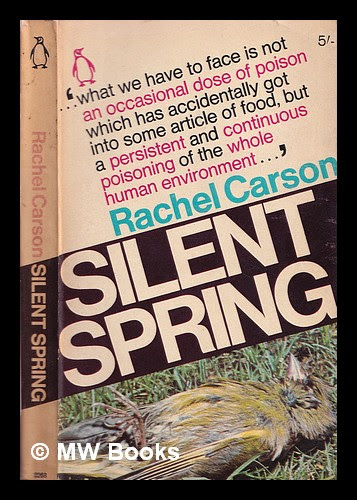 BOOK JACKET: Silent Spring, 50th Anniversary EditionSilent Spring began with a “fable for tomorrow” – a true story using a composite of examples drawn from many real communities where the use of DDT had caused damage to wildlife, birds, bees, agricultural animals, domestic pets, and even humans. Carson used it as an introduction to a very scientifically complicated and already controversial subject. This “fable” made an indelible impression on readers and was used by critics to charge that Carson was a fiction writer and not a scientist.

Serialized in three parts in The New Yorker, where President John F. Kennedy read it in the summer of 1962, Silent Spring was published in August and became an instant best-seller and the most talked about book in decades. Utilizing her many sources in federal science and in private research, Carson spent over six years documenting her analysis that humans were misusing powerful, persistent, chemical pesticides before knowing the full extent of their potential harm to the whole biota.

Carson’s passionate concern in Silent Spring is with the future of the planet and all life on Earth. She calls for humans to act responsibly, carefully, and as stewards of the living earth.

Additionally Silent Spring suggested a needed change in how democracies and liberal societies operated so that individuals and groups could question what their governments allowed others to put into the environment. Far from calling for sweeping changes in government policy, Carson believed the federal government was part of the problem. She admonished her readers and audiences to ask “Who Speaks, And Why?” and therein to set the seeds of social revolution. She identified human hubris and financial self-interest as the crux of the problem and asked if we could master ourselves and our appetites to live as though we humans are an equal part of the earth’s systems and not the master of them.

Carson expected criticism, but she did not expect to be personally vilified by the chemical industry and its allies in and out of government. She spent her last years courageously defending the truth of her conclusions until her untimely death in 1964.

Silent Spring inspired the modern environmental movement, which began in earnest a decade later. It is recognized as the environmental text that “changed the world.” She aimed at igniting a democratic activist movement that would not only question the direction of science and technology but would also demand answers and accountability. Rachel Carson was a prophetic voice and her “witness for nature” is even more relevant and needed if our planet is to survive into a 22nd century.